The F1 Esports Pro Series is back with a vengeance, and the first live event of 2019 provided excitement, controversy and action by the bucketload.

After a stellar 2018 series which saw Brendon Leigh crowned champion for the second consecutive year, the queue of people to depose him grows ever longer. With a full complement of 10 teams, each with three top-class drivers, the bar is at an all-time high. Unlike last season, the season began in Bahrain, replacing the Australian round of the championship, with China and Azerbaijan returning to complete the first event.

David Tonizza was the star of the show, claiming two victories and another podium, proving that Ferrari made an inspired choice by choosing him as the first pick of the 2019 Pro Draft.

First race, first win on the board for Ferrari Driver Academy! After starting an impressive third on the grid, Italy’s David Tonizza dominated the first race of 2019 under the floodlights in Bahrain. He made his move for the lead shortly before the pit stop phase, overcoming Daniel Bereznay for top spot.

On the flip-side, it was a story of heartbreak for new Alfa Romeo signing Bereznay, who tagged the back-end of Tonizza on Lap 6, racer, spinning himself round and dropping him out of contention.

The Hungarian just barely over-shot his braking zone into Turn 4, but it was enough to ruin his season opener. So despite showing pace that looked set to earn a podium, he was left frustrated, and finished down in P19, well out of the points.

Red Bull new blood Frederik Rasmussen looked on for a top-three finish, but was caught up in the Bereznay-Tonizza melee, and dropped outside the points after picking up wing damage. New Renault signing Jarno Opmeer progressed from P4 on the grid to seal a fine second-place finish on his F1 Esports debut, meaning they are already just five points behind their 2018 points haul after just one race.

Alfa Romeo’s Salih Saltunc completed the podium, making it a bittersweet desert showdown for the much-fancied Italian outfit after Bereznay’s no-score. Alfa are intent on challenging Mercedes for the teams’ championship this season, and it was an unusually slow start for reigning champion Brendon Leigh, who wound up P5 after running long early in the race. SportPesa Racing Point’s Marcel Keifer claimed fourth ahead of Leigh, with Italian duo Enzo Bonito and Daniele Haddad sixth and seventh.

Patrik Holzmann claimed P8 for Toro Rosso’s first points of the season, with Haas’s new signing Floris Wijers ninth, and Bono Huis last of the points-scorers for McLaren in tenth. Jan Fehler claimed the first fastest lap of the series, but finishing down in 20th meant that no bonus point was awarded, as drivers must finish in the top ten to be eligible for the DHL fastest lap award.

Ferrari Driver Academy followed up with a second win in a row, with Tonizza once again demonstrating his monstrous pace in Shanghai. However it was a breathless duel for the second spot on the podium that kept the crowd on the edge of their seats.

Heading into Lap 6, the pair were side-by-side throughout the entire first sector, until Kiefer eventually conceded defeat.

Dani Bereznay was in the mix once again, but the Hungarian experienced issues mid-way though the race, and eventually retired. His team mate however was able to secure fourth place to give Alfa another clutch of points. Opmeer added to his podium in the first race with a strong fifth place, with Huis, Patryk Krutyj, Haddad and Joni Tormala completing the points. 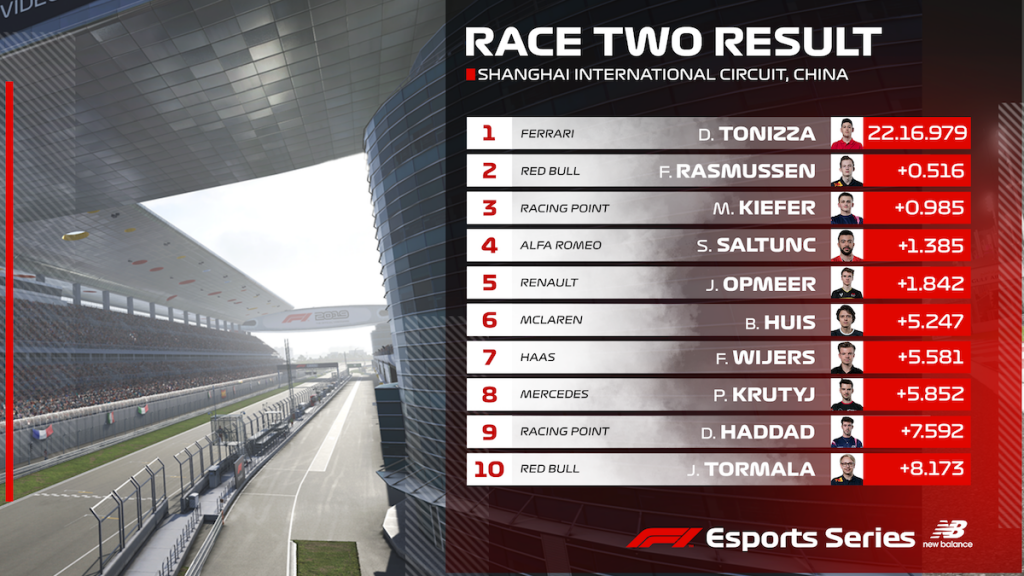 Frederik Rasmussen prevented David Tonizza from taking a clean sweep in Baku. No stranger to winning in Baku, the Dane showed his street circuit expertise with a well-controlled race at the front in Baku, to make it two podiums in a row and mark himself as a championship contender once more.

Many will remember his epic battle over the line with Brendon Leigh in 2018, with less than a tenth of a second separating the two, and there were similar scenes this year, albeit for P3. Tonizza duelled tooth-and-nail with Alvaro Carreton along the main straight, and they crossed the line virtually neck-and-neck. However, a time penalty for Carreton for speeding in the pit lane dropped him down the order.

The remaining podium spot in P2 was filled by Carreton’s Williams stablemate Tino Naukkarinen, who subbed in for Isaac Price after the first two races.

Behind the top three, Brendon Leigh got back into his groove with P4, followed by Bono Huis in fifth. Then completing the points were Carreton, Bereznay, Kiefer, Saltunc and Cedric Thome, who took his first point of the season. 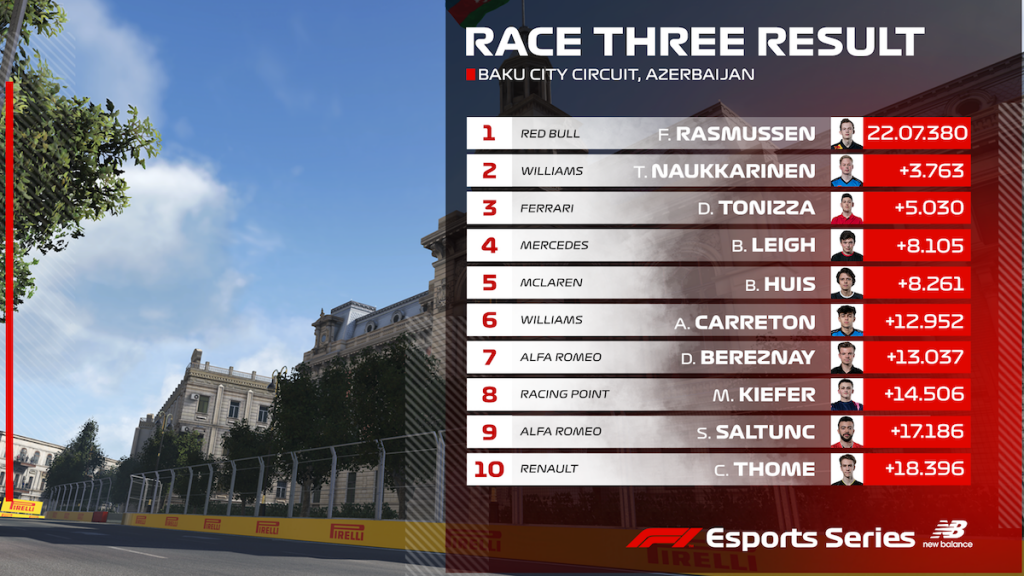 All this leaves Tonizza on top of the drivers’ standings with 65 points, ahead of Frederik Rasmussen on 43, and Marcel Kiefer in third on 29.

All of Ferrari’s points are scored by Tonizza and they lead the teams’ standings on 65, from Red Bull on 44, and SportPesa Racing Point who have 38 thanks to the efforts of Kiefer and Haddad.

The second F1 Esports Pro Series Event isn’t a million miles away, with the event getting under way on Wednesday October 2.