This 2019 season just keeps getting more and more unpredictable! With two new winners spicing up the racing, the championship took another incredible twist as we enter the latter stages of the action.

After a stuttering start, it was Alfa Romeo’s Daniel Bereznay who starred on the night, taking two wins in a row, with Jarno Opmeer also opening his account for Renault Vitality.

A trio of European classics in the form of Hockenehim, Spa and Monza lit up the GFinity Arena in London as the penultimate event of the 2019 F1 New Balance Esports Pro Series shook out. Here’s what went down in our latest trio of races…

As if to mirror the events of Live Event Two, a yellow car took first blood. Jarno Opmeer played a stunning strategy to perfection in Hockenheim, with an alternate call on tyres putting him in a fine position at the end of the race. The Dutchman began on medium tyres, giving him a huge pace advantage come the end of the race.

It enabled him to pounce on both David Tonizza and then-leader Joni Tormala within the space of three laps; displacing the Italian on Lap 13, and then the Finn on Lap 15. From then, he was able to saunter off into the distance and comfortably take the chequered flag for the first time.

Last year’s champion Brendon Leigh fared less well however, coming unstuck on the second lap and tagging the back of Salih Saltunc. The damage sustained was not race-ending, but it affected his performance to such a degree that he lingered near the back of the pack for the remainder of the race, finishing P17.

Cometh the hour, cometh the Daniel Bereznay. Alfa Romeo Racing Team Manager Jamie MacLaurin affectionately dubbed the Hungarian as ‘the fastest man in the world at Spa-Francorchamps’. And he more than proved that, with an astonishing display in Belgium.

Curiously, Bereznay and Rasmussen actually worked together, breaking away from the chasing pack, headed by Racing Point’s Daniele Haddad. Their slipstream exchange would only last so long, of course, and the final laps proved to be a tense showdown.

Bereznay pitted a lap later than Rasmussen, and after exiting the pits on Lap 8, he sat patiently behind Rasmussen for the final few laps. He tweaked his ERS and fuel settings to ensure he wouldn’t get past – thus giving him a chance to slingshot back past the next lap – but remaining within DRS range to stay in the hunt. His tactics would prove to be inspired, as he waited to pounce on the very last lap, using the long run from La Source all the way to Les Combes to take the lead permanently.

The battle for the final podium place was won by Opmeer, meaning he lost ground to Rasmussen, but gained points on Tonizza, who crossed the line fifth.

Honourable mention must be made for Red Bull’s Joni Tormala. He might’ve missed out on the win last time out, but he played a blinder in Spa with a huge undercut. He pitted on the very first lap, and ended up crossing the line sixth, after starting ten positions back.

Not content with just putting his first win on the board, Bereznay hit fine form by slamming his Alfa on pole for the live race of Event 3. To add to the excitement, his old Mercedes team mate and sparring partner Brendon Leigh lined up alongside him, to give us a 2018-era front row for the first time this season.

Leigh didn’t quite get the start he would’ve wanted, dropping down to P4. He decided to pit early after beginning on the more durable medium tyre, option to run the softs for 11 long laps. The strategy didn’t quite come to fruition – despite Monza’s low-degradation nature – and he crossed the line in sixth.

Championship leader Tonizza crossed the line third, chased all the way by a resurgent Tino Naukkarinen.

There were three debutants for this race, with Nicolas Longuet, Daniel Shields and Lucas Blakely all making their first race appearance in the 2019 Pro Series. Of the trio, Longuet had by far the most eventful one, leading portions of the race and taking the fight to Bereznay with just a handful of laps to go.

However once the Hungarian got past, the new blood was unable to mount an effective charge. Still, to wind up second on your debut is no slouch – especially when juxtaposed against the tricky race for team mate and championship challenger Rasmussen. The Dane picked up damage on the opening lap of the race, and was unable to recover, crossing the line well outside the points.

After all the action, Tonizza still leads the way on 145 points, with Frede Rasmussen in second on 120. Opmeer maintains P3 on 103, with the resurgent Bereznay climbing to fourth on 93 points.

Marcel Kiefer remains fifth after coming off the boil from his win in Silverstone, just ahead of reigning champion Brendon Leigh who sits sixth on 56 points. 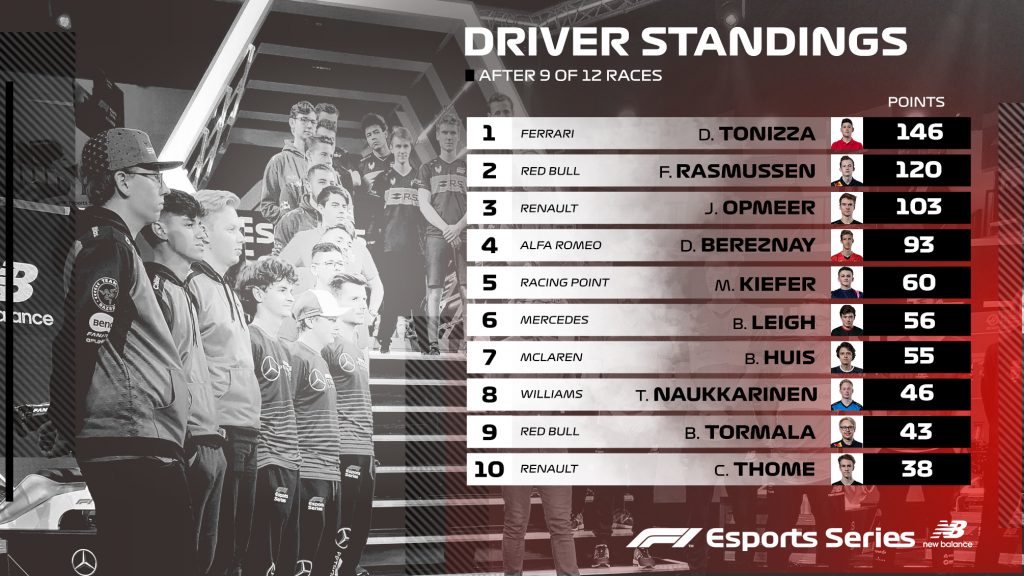 Behind them, Alfa Romeo continue their ascent after a very strong trio of races, breaking into triple figures on 127. 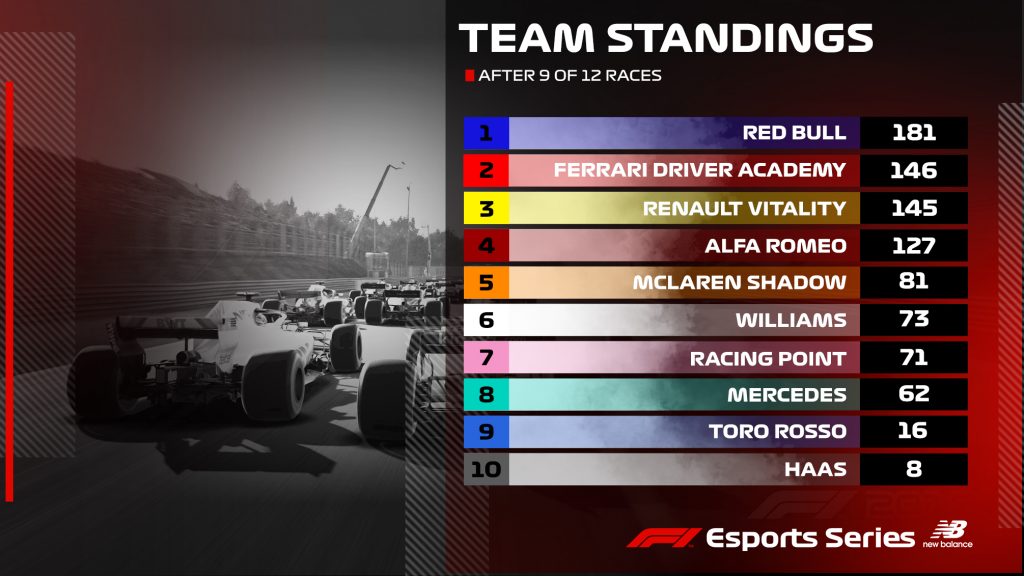 Time flies when you’re having fun – just one F1 Esports event remains this season! Join us for all the action in the grand finale on Wednesday December 4, as we crown our teams’ and drivers’ champions for another year.

And remember, there’s till time to qualifying for the final F1 Esports Playoff Series race, and also earn yourself a spot in our random Australian Grand Prix prize draw! Get practicing, and we could be featuring you at the top of the tables next year…