Excitement levels? Up. Stakes? Raised. The 2019 F1 New Balance Esports Series entered a new phase of qualifying this week, with ten places per day in the Pro Draft up for grabs in race-off events from Monday through to Wednesday. Here’s a breakdown of the races that happened, and the names you should get used to hearing for 2019…

Monday’s PS4 race-off got proceedings off to a dramatic start, with the 17 fastest drivers from PS4 qualifying battling for a top ten place at Circuit Gilles-Villeneuve in Canada. A place at the Pro Draft in July – and with it, the chance of landing a spot on an official F1 Esports team – would be the reward, and the tension was palpable as the lights went out.

After taking first place late on in qualifying with a stunning lap, pole-sitter David Tonizza got off to a dreadful start in the wet conditions, spinning several times on the opening lap to fall out of the top ten qualifying places. He delivered a masterclass in coolness over the rest of the race, producing several daring overtakes to battle back to P7 at the chequered flag to grab a Pro Draft spot.

At the head of the field, the win went to a driver who is a newcomer to the F1 Esports Series this year. Fabio Dirocco, racing under the pseudonym X_Fab_13X, coasted home to a comfortable win after starting P4 on the grid. 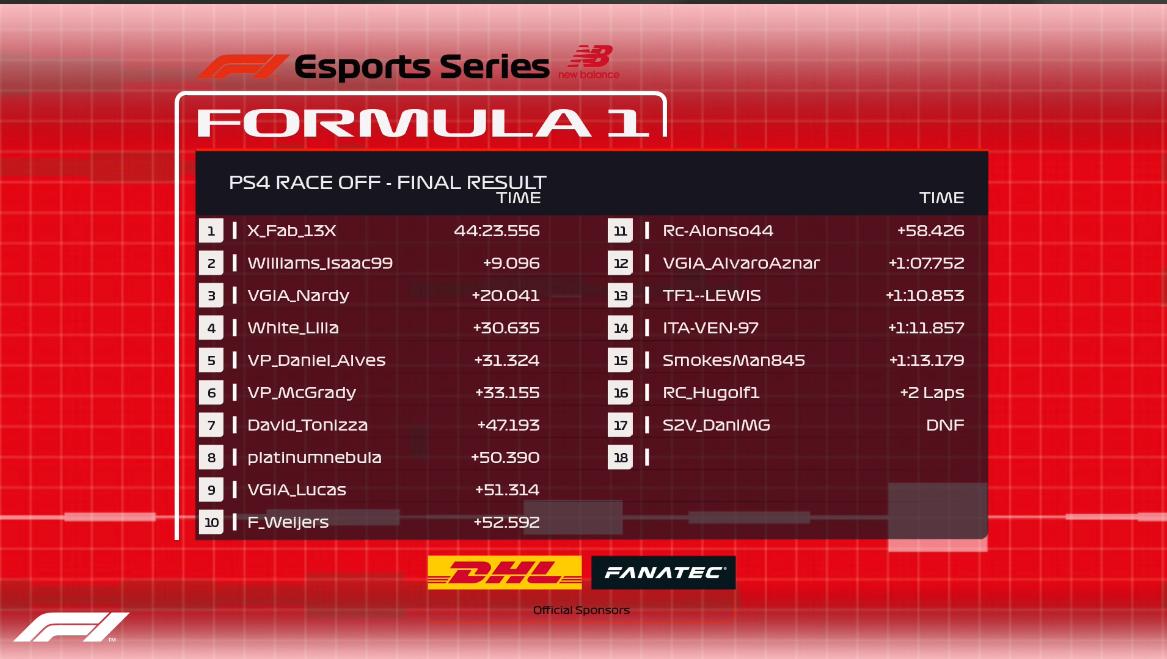 The second race-off event on Tuesday pitted the top drivers from online qualifying sessions on PC. The competition was fierce, with more prized spots in the the Pro Draft on offer to the top ten finishers, with Montreal once again providing an exciting stage.

Although he would ultimately finish P3, the standout story of the race was the rollercoaster ride endured by ChroMatk. He started from pole after blowing the field away in qualifying, with his scorching flying lap timed at almost four tenths faster than his closest rival.

At lights out he powered into a commanding lead, but fate would intervene – forcing him to make a second pit stop on Lap 23 after suffering damage to his front wing. With a Pro Draft qualifying spot in jeopardy, he then produced a dazzling recovery drive over the final third of the race to make the podium.

Up ahead, it was CRG Sztiv who capitalised most, blocking out the chaos around him to take the win by 2.669s from VP Presnajder. Further back, Gianfranco Giglioli produced a superb drive under intense pressure to claim P10 and the final Pro Draft spot, despite starting in P15. 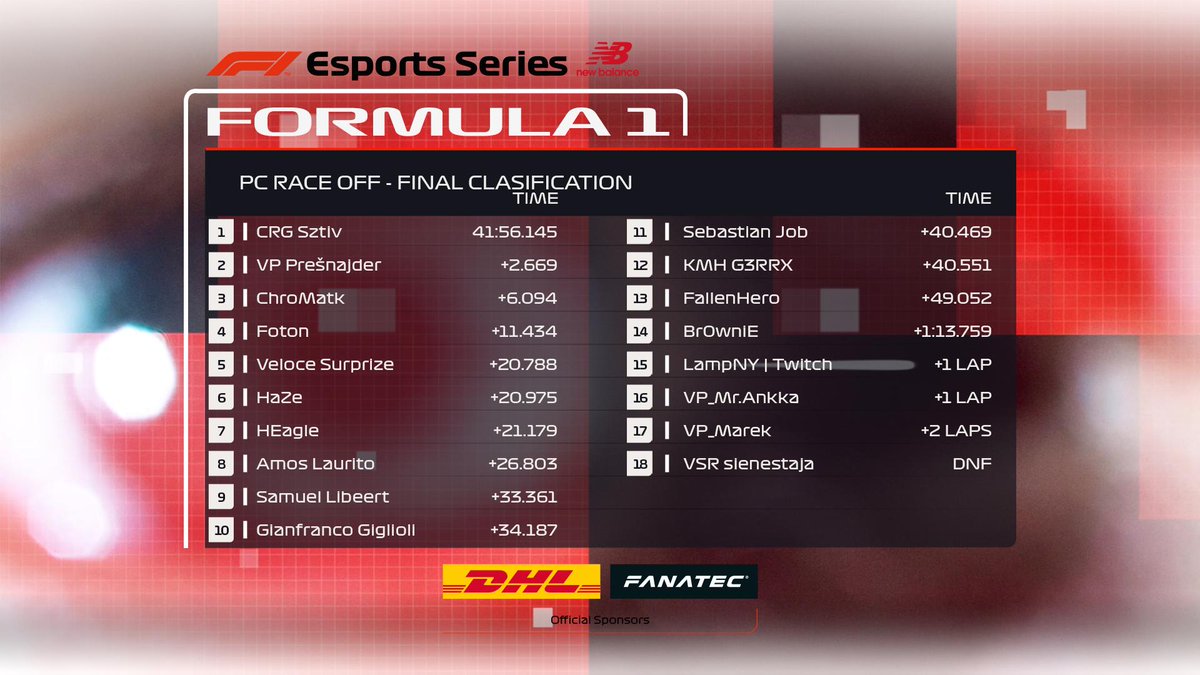 Unsurprisingly, the third race on Wednesday provided just as much excitement as the two that preceded it, with a wet race once again adding to the spectacle, as the final ten spots up for grabs via the Race-offs became available, for the 18 fastest qualifiers on Xbox One.

The story of the race belonged to CRG Simon, whose excellent getaway on the line vaulted him past poleman ADT Kowalsky and into a lead he refused to relinquish. So great was Simon’s stranglehold on the race, he ended up with a 16-second advantage by the time he took the chequered flag, ahead of home race Kyle Mitchell, who powered his way to a podium from a fifth-place start.

Another race of note was for that of the charmingly-named SnazzyEvening44, who ascended from dead last on the grid to storm through to eighth on the grid, which became sixth after penalties were applied for drivers ahead.

The much-fancied CRL Rosberg meanwhile, was less fortunate with penalties, ending up an agonising P11 after two separate three-second time penalties dropped him from his original finishing position of tenth, to missing the cut by the smallest of margins. 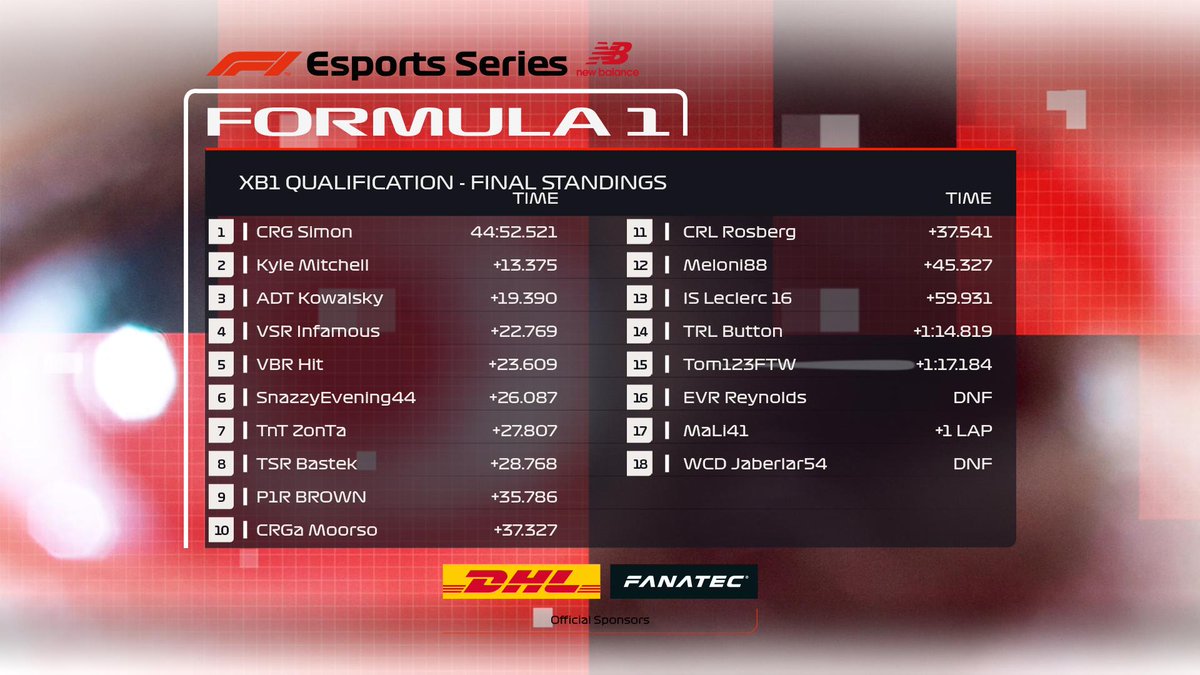 The Pro Draft takes place on 16-17 July, where the official F1 Esports teams will pick at least once driver from the pool of talent on offer.