The 2020 F1 Esports Series presented by Aramco, will be the fourth year of competition in Formula 1’s elite virtual racing series. Itâ€™s just around the corner, but when are the key dates for your sim racing diary? Letâ€™s take it from the top…

The Pro Draft Reveal show will be the first event in proceedings, taking place on Thursday August 27.

Here, the 10 official F1 Esports teams will select at least one driver from a pool of 45 up for selection. They will then add this driver to their roster of previously-signed drivers, making a three-person squad eligible for racing. Qualifiers for the Pro Draft include winners of 2019’s Challenger Series, Play-Offs, Time Trials, as well as released drivers from the 2019 Pro Series, and of course, our top two from the F1 Esports Series China Championship.

The show will reveal each teamâ€™s three-driver roster for the 2020 Pro Series for the very first time, with the hosting team previewing the season ahead and debating which teams have the best chance of success.

The Pro Series will take place over the autumn and winter, from October to December.

Each event is comprised of two days of racing, the first of which will see practice for the first race, followed by a full qualifying session and brand-new 35% distance race. This is then repeated for the second race of the event, with the qualifying and race sessions from the second race broadcast live. For the first time this season, qualifying shows will be introduced showing live elements and highlights from qualifying with dedicated streams both days on Twitch.

The third and final day once again sees qualifying and the race shown live in full.

The first event of the 2020 F1 Esports Pro Series presented by Aramco will take us to three Asian locations. First up, the Bahrain International Circuit will play host to the curtain-raiser, and will be the only event held at night-time conditions in the series. This race in 2019 was dominated by Alfa Romeo Racing Esports’ Dani Bereznay, until a collision with Frede Rasmussen put him in a spin, enabling David Tonizza to waltz into the lead.

Then it’s off to Vietnam, as the teams and drivers tackle the super-difficult and brand spanking new Hanoi Street Circuit. This blend of speed, downforce and bravery will test the racers to a high degree, and curiously means that the track debuts digitally before it does in real life. 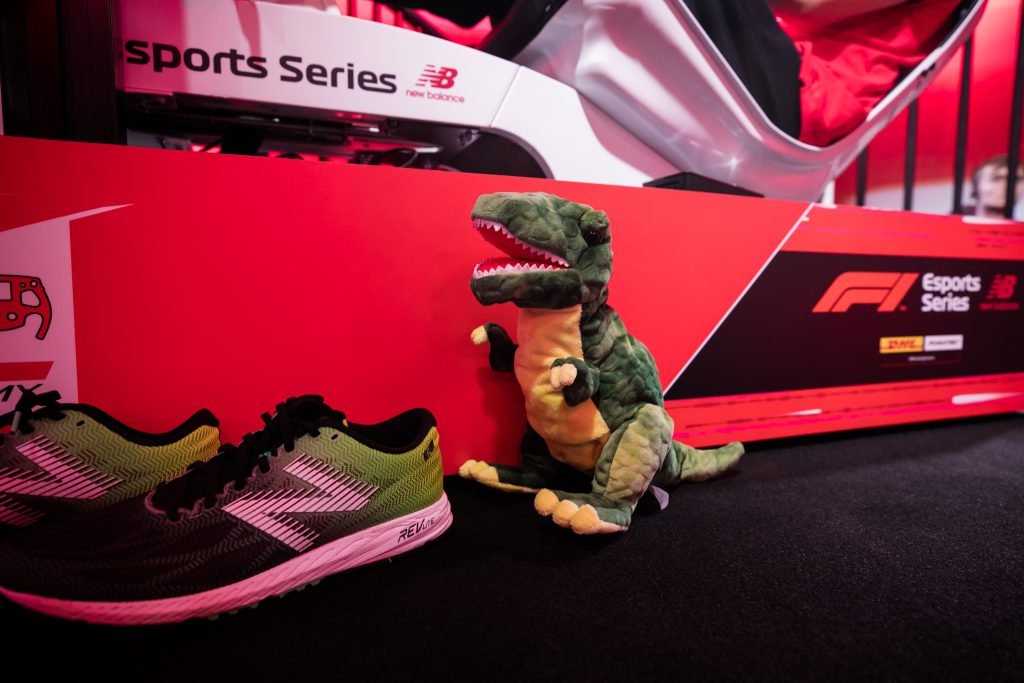 For the third and final race of the opening trio Shanghai International Circuit is the venue. Another combination of rapid straights and almost never-ending medium-speed corners, this one is a proper tyre-killer, so managing that will be crucial in the race. Tonzilla roared once again here in 2019, so he’ll be looking to add to his tally.

Event 2 opens up with a brand new event at the Dutch Grand Prix circuit of Zandvoort, which last hosted a Formula 1 race in 1985. Being a new circuit, there was of course no winner last year, although you can bet your bottom dollar that the drivers will have practiced around this circuit in their hundreds of hours in the run-up to the series beginning.

After that, it’s another classic Formula 1 venue, with Circuit Gilles Villeneuve in Canada. This venue played host to one of the most controversial and exciting races of the 2019 Pro Series, with heavy rain and plenty of penalties. Red Bull Racing Esports driver Frederik Rasmussen originally took the win, but it was Renault Sport Vitality’s Cedric Thome was granted the victory on that occasion after several post-race penalties for multiple drivers completely changed the complexion of the results.

Finally, the third race of the trio will take us to the Red Bull Ring in Austria, which played host to two Grands Prix in the traditional F1 championship in 2020. The top two in the championship were nose-to-tail in this event last year, with Rasmussen hot on Tonizza’s gearbox for almost the entire race. Rather than risk an overtake with the possibility of both drivers spinning off, the Dane patiently waited for an opportunity. It never came, and so they crossed the line as evenly-matched rivals one and two.

The third event of the Pro Series is just a couple of weeks later, the shortest turnaround between two events we’ve seen before in the championship. Silverstone was another venue that got two races in 2020, and while we’re only heading there for one race, there is sure to be just as much action packed in. Racing Point’s Marcel Kiefer prevailed at this event last season, a win he admitted may have come too late for his title charge. However, with a new team for 2020, he could hope to carry over that form.

Race eight takes us to the digital Ardennes Forest and the fearsome Spa-Francorchamps. After two close calls earlier in the season, nothing and nobody was going to stop Dani Bereznay from taking the win in Belgium. Team Manager Jamie MacLaurin once dubbed Bereznay ‘The fastest driver in the world at Spa’, and he proved this beyond measure, with a well-timed battle with Frede Rasmussen unravelling on the final lap, as he bombed past on the Kemmel Straight. 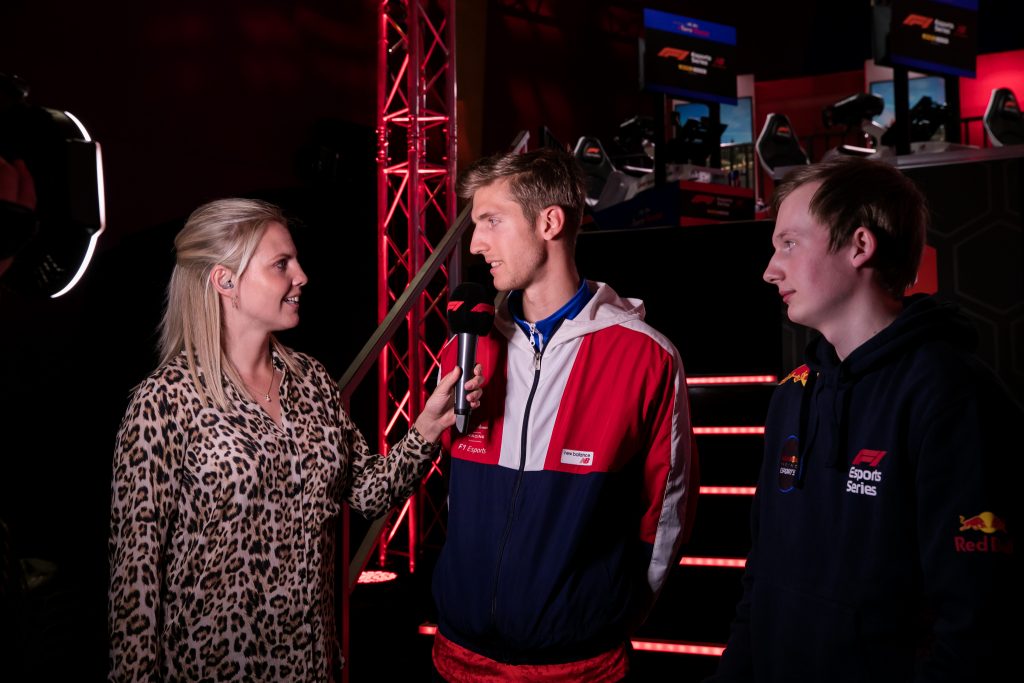 Monza. Nothing quite compares to the temple of speed, and that’s where we will be racing as we wrap up the penultimate event of the series. In 2019, the qualifying shenanigans were just as prominent as those seen in the 2019 Grand Prix itself, with slipstreaming the order of the day. Bereznay made it back-to-back wins to earmark himself as a late championship challenger, although his win was arguably overshadowed by the emergence of Nicolas Longuet, who took P2 in his maiden F1 Esports appearance.

The Grand Final will take place as we head towards Christmas, and with three races left to run, it’s likely there will be plenty of presents on offer still. We go first to the unofficial driver’s circuit, Suzuka. This race culminated in yet another win for Rasmussen, as he began to eat into Tonizza’s championship lead late in the 2019 championship. It was also notable for the breakout race for Lucas Blakeley, who perfected his strategy to grab a stunning second place.

Mexico City plays host to the penultimate race in the 2020 Pro Series, and is a new event for this year. However, it was at this round of the championship last year that Red Bull Racing Esports scooped the teams’ title, with Rasmussen taking his third win of the season.

All good things come to an end, but we’re sending the 2020 season out with a bang. The much-loved Interlagos will be our swansong race in the championship. Last year it provided the ultimate finale, with Rasmussen and Tonizza just four points apart! A strong race for Tonizza left him leading, although the hard-charging Bereznay came along to take his third win of the season with just a few laps to go. Rasmussen in the end had a tough race and scored just a single point in P10, leaving Tonzilla to be crowned champion!

And who would we be to give you all this information without a handy calendar in one place? Check out the calendar below. 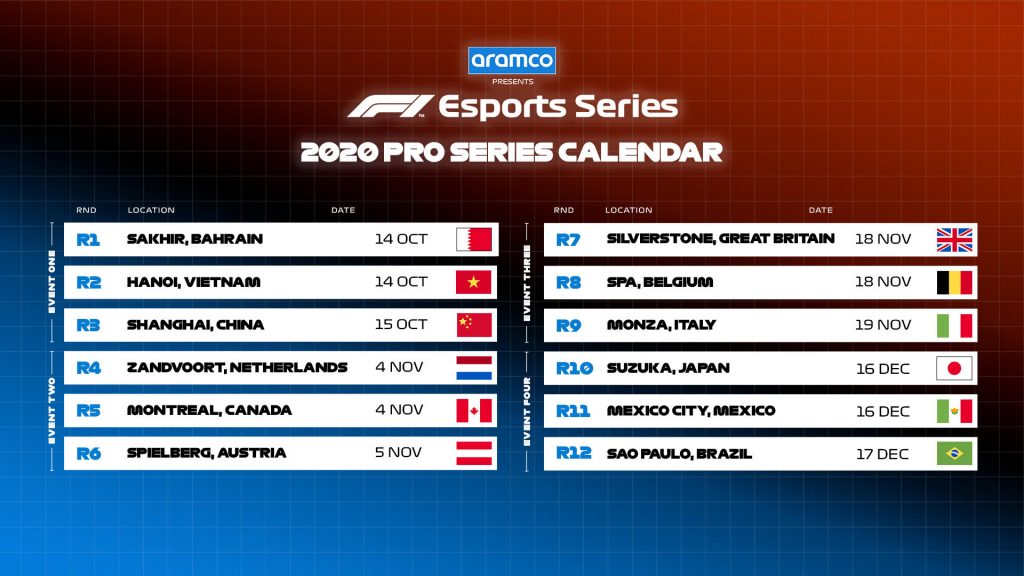 So there you have it – there’s your full rundown of every race we’re tackling this season, and a handy reminder of what happened this year. Who do you think will prevail at each venue? Let us know on social media with the hashtag #F1Esports, and be sure to join our Facebook Group for plenty more discussion!